No GMOs. No toxic chemicals. No crap. Yes delicious.

We grow a variety of specialty greens and culinary herbs including asian greens, basils, lettuces, micro-greens, mustards and other greens.

Pak choi is a type of Chinese cabbage that can range in size, shape and colour. Pak Choi is a source of vitamin A, vitamin C, vitamin K, folate, vitamin B6 and calcium.

Tatsoi is a versatile green, equally suited to being served raw or lightly cooked and can be used for pesto, salads, stir frys and garnishing soup. The leaves are similar to romaine, while the stalks taste a little like cucumber, with a mild bitterness. Tatsoi is a source of vitamin C, carotenoids, folic acid, calcium and potassium.

Choi sum is a green leafy vegetable similar to gai lan, and can be characterized by the distinct yellow flowers which it bears. Choi sum is a source of calcium, iron, and vitamins A and C,

Basil, the ‘royal plant’ is native to tropical regions but it is used in cuisine from around the world. There are an estimated 50 to 150 species of basil. Basil leaves are used fresh or dried to flavour meats, fish, salads, and sauces. Basil can even be used to make tea or to flavour oils and liqueurs. Due to varying types and quantities of essential oils, varietals may incorporate flavours ranging from cinnamon to lemon to anise.

In addition to antioxidant vitamins and phenolics, Basil is a rich source of vitamin K, zinc, calcium, magnesium, potassium and dietary fibre.

Genovese basil is a variety of sweet basil that originated in Italy. Its vigorous, large leaves have a sweet, slightly spicy flavor. Genovese basil produces bright green, slightly crinkled leaves. They are excellent for pesto, caprese salad and other dishes that require large, fresh basil leaves.

Lemon basil is more common in Asia and is known in Laos, where it is used extensively in soups, stews,curries and stir-fried dishes, as ‘pak i tou’.

Sweet Thai basil is originally native to Southeast Asia. Its flavor, described as anise- and licorice-like and slightly spicy, is more stable under high or extended cooking temperatures than that of sweet basil. Thai basil has small, narrow leaves, purple stems, and pink-purple flowers.

We grow lettuce varietals with notable aesthetics including leaf shape and colour notes (combinations of bronzes, greens and reds).

Lettuce is a source of Vitamin A, folate (a B-vitamin), Vitamin C, Vitamin K as well as calcium, iron, magnesium, phosphorous and potassium. It is naturally low in sodium. 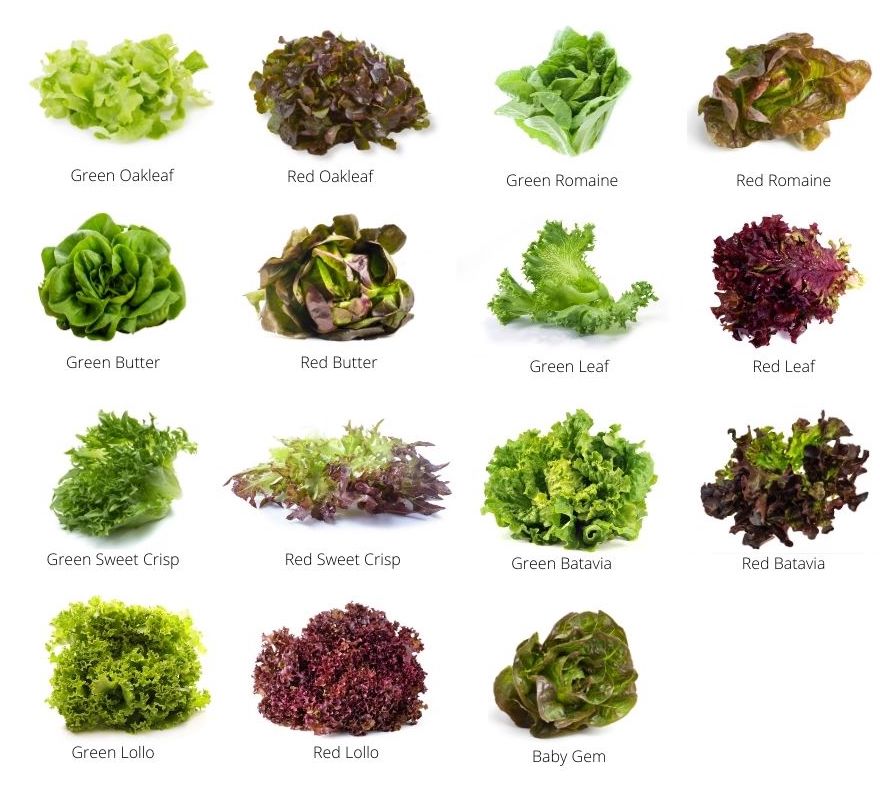 Batavia lettuce, also known as Summer Crisp or French Crisp, is sweet and juicy with a crisp texture. It is an ideal leaf base to build a salad and mixes well with other lettuces. It can be enjoyed in salads (our favourite is with sweet pepper, mango and goat cheese), rolled up in wraps and in sandwiches where it provides a juicy crunch element.

Butterhead lettuce is generally grown to full-size heads and receives its name from the sweet buttery flavor and delicate texture of the large, ruffled outer leaves. Cutting into the lettuce reveals a soft, folded, and blanched heart.

Also called ‘Sucrine’ or ‘Sugar Cos’, ‘Little Gem’ is a small English heriloom lettuce often described as ‘a combination of Butter lettuce and Romaine’. It is crisp, like Romaine, and sweet, like Butter lettuce, but the texture and the flavor are still its own.

Lollo lettuce varieties have broad leaves in green or red tones, with heavily curled margins. The leaves of the heads do not close tightly but form an open rosette.

The individual leaves of oakleaf lettuce are deeply lobed and shaped like the leaves of oak trees. Oakleaf mixes well as a base with other salad greens.

Romaine lettuce, also known as Cos lettuce, has long, broad, upright leaves that bunch together as they mature. Although romaine varieties are well known for the hearts at the center of the heads, the outer leaves can also be used in salads, as a tortilla substitute for wraps, and are delicious grilled. Romaine lettuce is crisp and juicy, with a sweetness unmatched by other lettuce types.

Micro-greens are baby vegetables harvested after the sprouting stage – after the cotyledon leaves have developed or after the first true leaves emerge. Chefs use colourful micro-greens to enhance the attractiveness and taste of their dishes with distinct textures and unique flavours, such as sweet and spicy.

We grow an assortment of microgreens from purple-stem radish to spigariello.

Related to kale, cabbage, and collard greens, mustards are the peppery leafy greens of the mustard plant and are used frequently in Chinese, Japanese, and Indian cooking. We produce several mustard varietals from all over the world. Mustard leaves add a spicy punch when eaten raw and their taste mellows when cooked.

Mizuna is also known as kyona, Japanese mustard greens, or spider mustard. It’s delicate toothed leaves and mild flavour, make this an ingredient that incorporates well into a variety of raw and cooked dishes.

Scarlet Frills is a visually striking mustard. It has deeply lobed and frilly, lacy green leaves with purple veins and highlights.

Arugula, also known as rucola, salad rocket, and Italian cress is a peppery, distinctive-tasting green that originated in the Mediterranean region. Arugula is delicious raw, and can be used as a healthy add-on topping for pizza, sandwiches, and wraps. It can also be served as a side salad with nothing more than a drizzle of extra virgin olive oil, salt, and pepper or used as a base for more substantial salad recipes.

Arugula is nutrient-dense and high in fiber and phytochemicals. It is a source of calcium, potassium, folate, vitamin C, vitamin K and vitamin A.

The Curly endive varietal that we grow has narrow, finely cut, curly leaves. It tastes more bitter when consumed raw, such as in salads and mellows when cooked. Curly endive is rich in many vitamins and minerals, particularly folate, vitamins A and K, and also has high fiber content.

Italian dandelion is not the type of dandelion with which many of us are familiar and is in fact not a ‘true’ dandelion. It has elongated, deep green leaves. Its flavour profile pairs well with bacon, garlic, onion, lemon and other strong flavours. Leaves can also be lightly steamed prior to sauteeing to help mellow out any unwanted bitterness. Italian dandelion is a source of fiber, calcium, potassium and beta carotene.

Join Our Newsletter
No, thank you